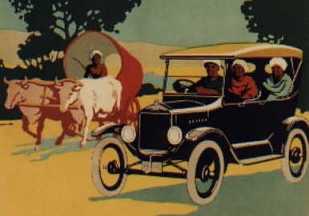 Early Ford History with Pictures
Click thumbprint pictures below for a larger view!

As the twentieth century drew to a close a group of automotive
journalists and writers got together to list the world’s top 100 cars of
the century. The winning car was the Model T Ford. Though the term
‘world car’ didn’t exist the Model T could easily be considered such as
it could be purchased on almost every continent. Ford of Canada was a
very active contributor to distributing Model T’s to over 40 countries
around the world.

Soon after the beginning of Ford Motor Co. in Detroit, Gordon
McGregor, president Ford Motor Company of Canada established
manufacturing rights for Ford products in Canada. Chassis and some body
components were brought across the Detroit River via ferry to the
Walkerville plant. By the time the Model T was introduced in late 1908
Ford of Canada had established world-wide distribution and manufacturing
rights for Ford products in all the British Colonies with the exception
of the British Isles. At this time in the early part of this century a
preferential tariff was given to goods and materials made in the
British Commonwealth. This opened a huge market potential for the
company. Of course the logistics of shipping to countries far away kept
a whole department of Ford of Canada very busy.

By the 1920’s more of the rural population realised the
potential of the automobile and new roads were soon under construction.
For countries in other parts of the British colonies the road systems
there were not nearly as well developed. However the lower price of the
Model T helped compensate so sales were made everywhere.
Though the Model T was a spindley little car, vanadium steel was
used in extensively in the chassis components. This made the Model T a
tough and light car able to handle rough roads. Its lightness meant the
car wouldn’t sink into a muddy road as much as a heavier car. The
simplicity of the Model T’s utilitarian design also lent itself for use in
remote locations. A lot of improvised repairs could be made on the fly.

A number of unique features would be seen on the export versions
of the Model T. For the cars shipped to tropical climates the radiator
was made with an enlarged upper tank for better cooling to better handle
driving in the hot temperatures. During the twenties the roadster and
touring bodies were supplied with an optional ‘khaki’ colored top
material as the black version would get too hot in the intense sunlight.
Also the majority of the export destination countries drove on the left
hand side of the road so the cars had the steering wheel on the right
hand side.

The right hand steering necessitated a different design of body.
For the Model Ts fabricated in the United States Henry Ford insisted
that the driver’s door on the Roadster and Touring bodies not operate to
prevent the driver from stepping out into the traffic. Also the location
of the emergency brake handle blocked the door so that exiting was very
difficult. In Canada however, all the roadster and touring bodies
supplied from Ford of Canada had opening left and right front doors in
order to accommodate the right hand drive. This would make the Canadian
Model Ts unique compared to the American made Fords which had an
embossing to look like a door on the driver’s side.

Some of the British Colonies would see varying numbers of Model
Ts imported from Canada. The rich diamond and gold mining country of
South Africa would see about 30000 Canadian Model T’s. Australia was by
far the biggest importer of Canadian made Model Ts. Around 100,000 Model
T’s were shipped ‘Down Under’ as either complete cars or in chassis
form. Along similar lines the island country of New Zealand would see
over 37,000 Canadian Model Ts. Some other destinations for Canadian made
Model Ts were India with 22,000 T’s, Java 7900, and Singapore 12,000. By
the end of the Model T production in all over 225,000 Canadian made
Model T’s were shipped abroad. 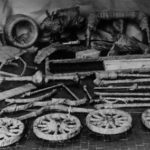 A complete Model T chassis in pieces can be
recognized by the shapes inside the wrapping of all
these components packaged for export.

Along with the cars a whole dealer and distribution network
would also be required. This would involve dealer show rooms with an
inventory of spare parts, service mechanics and the like. Of course
there would be the logistics of communication and shipping half way
around the world. This would ad to the costs of the cars and components
however the low price of a Model T would help reduce the ‘price shock’. 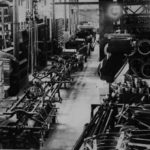 A miniature assembly line was set up at
the Ford Plant in Port Elizabeth South Africa.
Not all the parts stacked on shelves.

As time went on some of the more progressive countries’
governments would insist that the automotive manufacturing jobs take
place in their own country. This would lead to Ford of Canada setting up
plants in many of those respective countries. In 1924 the Ford Motor
Company of South Africa (Pty) limited was established in Port Elizabeth.
This was the first Canadian branch plant. In 1925 along similar lines to
South Africa a branch plant was set up in Geelong, South Australia. Some
of the specialised components were still made in Canada. For example the
engine blocks were cast, machined and assembled in Canada then shipped
overseas for assembly into the chassis. 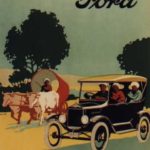 As well as shipping Model T’s to British Colonies
Ford of Canada produced and sent out
advertising literature like this example destined
for South Africa. Note the car is right hand
drive and the clothing worn by the occupants.

To this day “Made in Canada” can be seen right around the world
on Model T’s, Model A’ and Fords made into the 1930’s . This helped
establish Ford of Canada as a viable manufacturing facility and company
which has survived to this day.

Ford Model A History 1927-1932
In 1927, after producing the Ford Model T since 1908,  Henry Ford
closed his plant for seven months to switch his production to this very
secretly and hastily implemented new design. When the Model A was
launched on 2nd December 1927 it caused an immediate sensation.
Ford produced more than five million Model A cars from 1927 to
1932 when this model was superseded by a new V8 engined model.