Five DKW's and one Land Rover support crew met up in an attempt to
conquer the 300km journey to The Hell and back.
The Hell, a deep canyon accessed via a steep gravel road leading over the
Swartberg Pass which is regarded as quite an obstacle in itself.
However, we were planing to proceed way beyond this point, along a
narrow and torturous 56km gravel road winding down into the
Gamkaskloof valley, better known as The Hell. 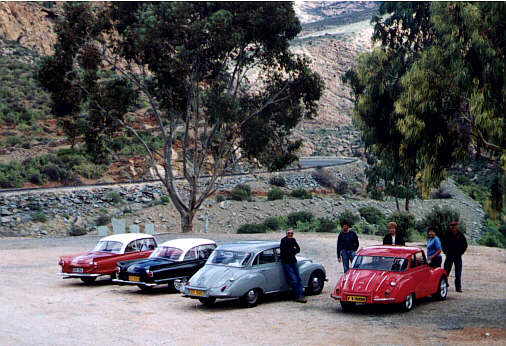 Although a small and self-sufficient community lived there for about one
hundred years in complete isolation, a track like gravel road was
eventually built in 1962. Life was extremely hard in this valley, with
temperatures regularly reaching close to 50 degrees Celsius, which must
have been a contributory factor when the valley was named The Hell.

In more recent years the new name of Gamkaskloof was introduced for
this valley which is now largely uninhabited, except for a Nature
Conservation Ranger, who told us that once every month he undertakes
the three hour trip to the nearest Town to replenish his supplies. 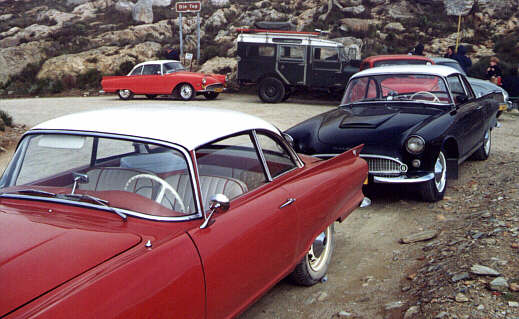 At the top of the
Swartberg pass

Although four wheel drive vehicles are recommended for this road, we
were determined to prove that there is life in our 40 year old DKW's.
Drivers of four wheel drive vehicles, who descended into this valley
before us were certain that we had almost no chance of completing the
journey with our DKW's.
A little apprehensively we drove along the track like gravel road,
constantly trying to navigate around the many rocks, gullies and
potholes. At times the road was so bad or so steep that large sections had
to be travelled in first gear. 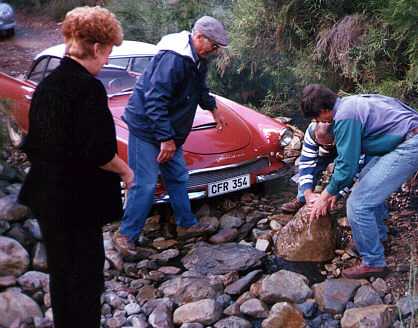 Two river beds
had to be crossed!

Two river beds had to be crossed. Our back up crew had some anxious
moments when we decided that this obstacle was not going to deter us.
At times we had to stop to rearrange the rocks, so that we could proceed.
Our brakes were also tested to the limit with the incredibly steep roads
we encountered. 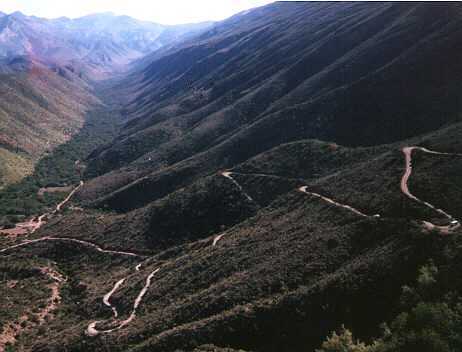 The road was very narrow
and frequently it was
almost impossible to pass!

There was great jubilation when we reached the floor of the canyon,
where we met up with the Nature Conservation Ranger, who told us
about the history of this canyon.
Soon it was time to start our return journey. Over a distance of about five
kilometres, we met up with three on-coming four wheel drive vehicles.
As the road was not only very narrow and steep with loose gravel and
many rocks, the canyon wall straight up on the left and straight down on
the right, it was impossible to pass.

There is life in our
40 year old DKW's

A substantial distance had to be reversed each time in an effort to find a
spot where the vehicles were able to inch pass each other.
It was also very hot in the canyon and the substantial distances of this
very steep road we had to cover in first gear caused our heat gauges to
hover at the absolute limit.
Eventually our procession arrived back on top of Swartberg Pass and
delighted that everybody had made it without incidence and without the
help of our support vehicle. 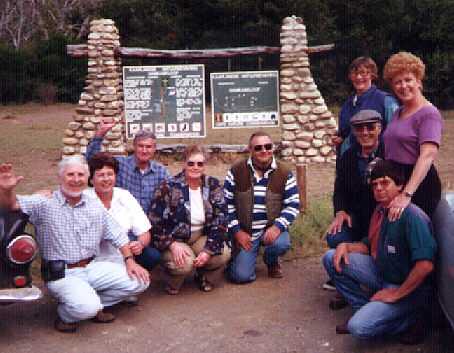 There was great jubilation when we reached the floor
of the canyon!

Very tired and absolutely covered in the dirt road dust, we arrived back at
the starting point around 19h00.
A treacherous journey which punished our cars, and an achievement we
will not attempt to repeat. However, it proves that our 40 year old
vehicles are well built, reliable and have achieved a feat which few
modern cars could repeat.